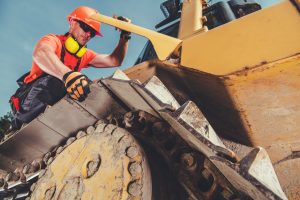 Some thefts originate from within, too. It’s common for workers on a large job site to be there only for the duration of the project. They have no ties to the contractor or feel any sense of responsibility to protect the job site equipment, especially if thieves are willing to cut them into the deal. Heavy equipment theft is a growing problem for large job sites in many areas of the country. Your first step in combating this is maintaining strict security guidelines with your crew with incentives to follow the security rules.

It is first important to understand why thieves target heavy equipment to begin with. Loaders, towables, and excavators are among the most common heavy equipment lost to theft. This equipment is usually protected by minimum security, left out overnight, and has a high resale value. Often the cabs are left unlocked, or the keys are stored in the cab itself. Construction sites don’t often have good records of their equipment. Therefore, the risk to the thief of being caught is low, the reward is high, and the large job site pays the price.

What Deters a Heavy Equipment Thief?

Because there are so many large jobs sites that are not well secured, thieves will often not bother with sites that are. If your site looks low risk, it’ll be a target. If there are any deterrents, such as motion activated lights, secure fences, cab locks, securing keys away from large equipment, or the presence of a trailer alarm, your site will likely be overlooked in favor of easier targets.

How a Trailer Alarm Can Protect Your Large Job Site

Incorporating a trailer alarm is a way to protect your large job site for times that no one is on site. Just the presence of an alarm will often deter thieves. Many thieves get information from employees about security, and if they know that your site is alarmed, they will look for a site that isn’t. And if a thief is attempting to steal large equipment, the alarm will stop them in the act, or alert the authorities to catch them before they have a chance to get away.

The loss of heavy equipment comes at a high cost for your construction project. Very little of the equipment stolen is recovered and the equipment that is will typically be damaged beyond use. The cost of replacement, increased insurance premiums, lost work time on the site, and loss of confidence from clients are all valid concerns. When it comes to heavy equipment on your job site, a trailer alarm is a viable defense to implement. Seagate Mobile Security can help with a tamper-proof trailer alarm that requires no dedicated power source or phone lines, and your job site is monitored 24/7. Contact us for more information about how you can keep your job site more secure.

Contacting us is simple. Complete the form below and a member of our team will reach out to you right away.